NSF just announced their Graduate Research Fellowship Program award winners and we are pleased to announce Taylor Stevenson and Joseph Moscoso have both received fellowship awards. This five year fellowship includes three years of financial support as well as a cost of education allowance. Taylor and Joseph are being recognized for their outstanding research in a STEM discipline.

Taylor Stevenson has been working with Fabian Heitsch and the Astrophysical Fluid Dynamics Lab on her current project since summer of 2019, using magneto-hydrodynamical simulations to explore the mixing of kilonova ejecta with the interstellar medium (ISM) and its nucleosynthesis. The origin of the r-process elements—some of the heaviest metals in our universe, which compose our physical reality—is still unknown. Binary neutron star mergers could be a source of r-process elements, due to heavy neutron bombardment of the ejecta during kilonova. Within old stellar populations, r-process abundances vary greatly. Numerical models of kilonovae predict that ejecta will have different chemical compositions depending on their direction of ejection: the tidal ejecta, which are ejected early and far from the merger, undergo a complete r-process, and the wind ejecta, which are exposed to a neutrino-driven wind, suffer an incomplete r-process. Therefore, one explanation for the nonuniformity in stellar abundances is that this chemically different ejecta might not mix completely during kilonova. The presence of imperfect mixing in observed abundance patterns in ejecta suggests two separate scenarios. The neutron star ejecta could be enriching the surrounding ISM with these abundances before it can fully mix, leading to chemical asymmetry in star formation, or these light and heavy r-process elements stem from different sources. Developing models of ejecta mixing can discern between these two scenarios. The combination of both types of ejecta can explain the abundance patterns found in r-process-enriched, metal-poor stars. Magnetohydrodynamical models of mixing ejecta from kilonova remnants will provide insight into whether chemical asymmetry is due to preservation of the ejecta’s direction, as well as how long directional enrichment lasts. The resultant code can provide predictions for kilonovae mixing and nucleosynthesis with high physical fidelity, offering insight into the evolution of r-process abundances and their influence on stellar populations. Knowledge about the origin of heavy elements is knowledge about our own origin, and our place in the universe.

Joseph Moscoso’s proposed project is in the field of nuclear astrophysics under Christian Iliadis investigating the role that thermonuclear reactions play in various astrophysical phenomena. He hopes to work on nuclear reactions associated with globular clusters, groups of stars located in the galactic halo that form during the early stages of galactic evolution. For this they work at TUNL’s Laboratory for Experimental Nuclear Astrophysics (LENA) which produces the world’s most intense proton beams for low energy nuclear reaction measurements. 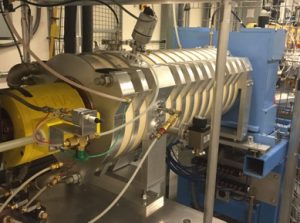 The goal is to design a fusion experiment to take nuclear reaction measurements to explain an unknown nucleosynthesis processes observed in cluster NGC 2419. Once data is collected, he will use Bayesian statistics to calculate thermonuclear rates using Monte Carlo sampling and nuclear reaction models to guide the data analysis and to treat non-Gaussian statistical uncertainties. These improved rates will be used in large-scale Monte Carlo nucleosynthesis simulations performed with STARLIB, a nuclear rate library for nucleosynthesis simulations. These simulations will assists us in interpreting how individual reactions can affect the observed abundances in galactic evolution, and specifically, the early globular cluster. For more information on STARLIB and nuclear astrophysics at UNC, check out the Iliadis group research page: https://iliadis.web.unc.edu/research/.
He would like to thank the National Science Foundation for this amazing opportunity and resource for completing his PhD at UNC! He would also like to thank his family, friends, and professors for supporting him through his studies and research efforts. He also very much appreciates his reference letter writers for always believing in him and his mother for encouraging him throughout the years.
Comments are closed.